I grew up on the east coast and was always fascinated with taking things apart to find out how they worked. Usually this meant the destruction of whatever I was checking out at the time.

I guess movies have a lot to do with what I do - I was at just the right age when the original Star Wars was released. That movie came out of nowhere and made it seem like a whole other universe existed; as if it actually happened and someone just filmed it and showed it on a movie screen.

Two other films that had a major artistic influence on me are the musical 'Chitty Chitty Bang Bang' with Dick Van Dyke (1968) and '20,000 Leagues Under the Sea' with Kurt Douglas (1954). 'Chitty Chitty Bang Bang' is actually a very imaginative story (courtesy of Ian Fleming and Roald Dahl) and has a lot of steampunk gadgets, crazy characters and beautiful settings. '20,000 Leagues Under the Sea' was just way ahead of its time and featured a steampunk submarine and a giant squid. I saw both of these when I was very young and they just seemed cool.

Probably my biggest influence is H. R. Giger, the Swiss artist who did the creature and alien spacecraft design for the original 'Alien' film (1980). Usually science fiction films this old tend to look dated, but everything this movie is so well done that it will probably remain fresh forever. I love pretty much everything else he's done as well.

I am not a skilled painter and am no good at drawing, but I've always been interested in music and studied film scoring at Berklee College of Music and went on to score music for student and independent films for a time. Unfortunately I graduated and smack dab into the great recession of the early 1990's, which may not seem that bad... but there was no internet then, so it was bad.

To pay the bills I worked catching shoplifters at a Tower Records in Boston. (There was no internet, so people had to actually go out and BUY music. Yes, people shelled out big cash for CD's, and loved it.)

Anyways, one day at Tower I saw an old metal stage lamp sitting around the basement and decided to take it home. This sat around my apartment for a while. Then, one day I was at a nearby thrift store and saw an old camera from the 1950's. The front of it had three lenses and to me it looked like a face. I thought it would be neat to make the camera a head and use the stage lamp as a body, then make some arms and legs out of lamps. 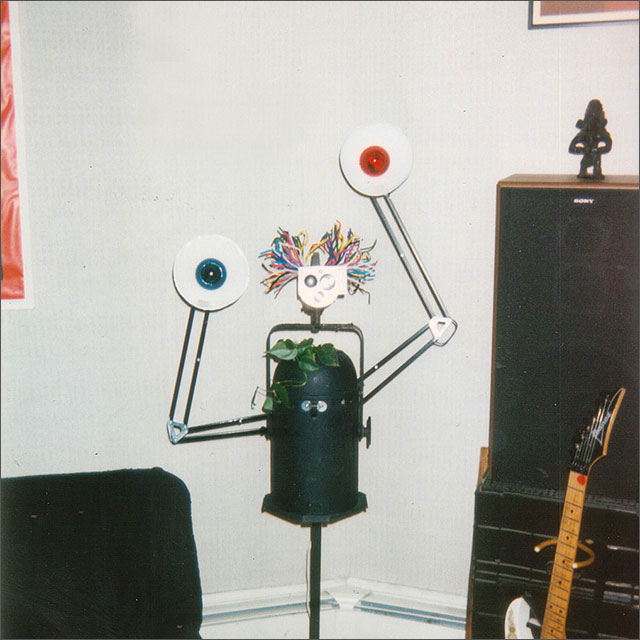 At the time I thought it was great, but obviously it wasn't.

Fast forward to 1999 - I always wanted to live in California and had an opportunity to get a job at a graphics shop in San Jose. After moving there I discovered that California had great flea markets - tons of cool junk for dirt cheap. I went every weekend picked up as much junk as I could, then brought it all home and bolted things together in any way that I thought would look good.

A few years later I moved to Los Angeles and continued my quest to acquire junk and make things out of it, which I did for about 10 years. I also started making musical instruments, particularly guitars made out of steel and aluminum.

But Los Angeles just got too expensive, and in 2014 I moved to Las Vegas, a city which is surprisingly livable. I make my living doing freelance multimedia design and sell a piece of artwork every now and again. For better or for worse, I've kept (hoarded?) most of my artwork and they are on display at my home. I occasionally show them at local art galleries and consignment shops. Currently I have pieces on display at ReBar and the Luxe Rust Gallery.

The goal of my artwork is to be very visual, unusual and interesting. I also want to make it seem like a lot of work and imagination was put into them. Some of the larger pieces (The Abyss, The Altar) take around 80 to 100 hours of work. 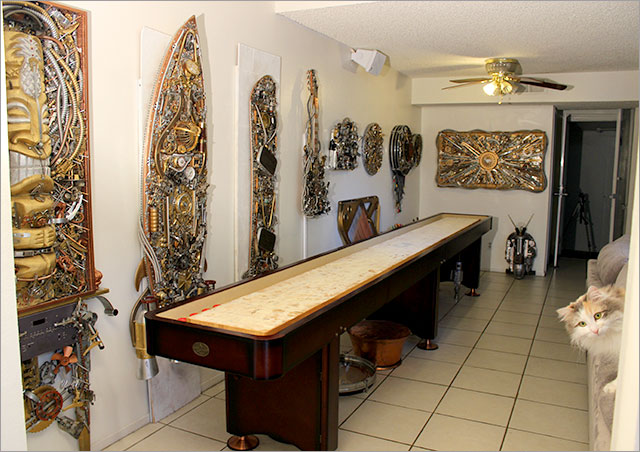